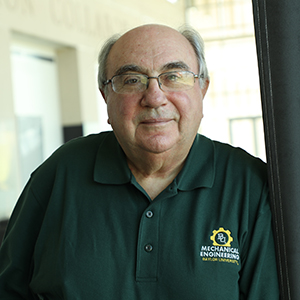 Dr. McErlean received his Ph.D. in Aerospace Engineering (Fluid Dynamics Major and Applied Mathematics Minor) from Rutgers University and a Master’s degree in Business/Management from the Sloan School of Management at M.I.T.

Dr. McErlean performed military service in the USAF as an Aerospace Engineering Officer, Air Force Systems Command from 1969 to 1973. He joined the Air Force Aeropropulsion Laboratory in 1973 as an aerospace engineer. He continued his career with the Laboratory with supervisory positions in both systems engineering and test and evaluation.

In 1979 he was promoted to Systems Engineering Manager for tactical aircraft engine programs. In 1982 he was selected as a Sloan Fellow and returned to M.I.T. for a Masters in Management. Upon completing that he was appointed as System Program Office (SPO) Director for propulsion programs serving F-15, F-16, B-1, B-2, and Joint Cruise Missile.

Selected for promotion to the Senior Executive Service (SES) in 1987, Dr. McErlean joined the Naval Air Development Center, being appointed Director of the Air Vehicle and Crew Systems Technology Department. In 1994, Dr. McErlean was jointly selected by both the Naval Air Systems Command and Air Force Aeronautical Systems Division to be Head of Technology for the Joint Advanced Strike Technology (JAST) / Joint Strike Fighter (JSF) program. From 1997 to 2005 he held sequential assignments as Head Air Vehicle Engineering Division, Head Test and Evaluation Group, Executive Director Naval Air Warfare Center, Deputy Assistant Commander for Logistics, and finally Deputy Assistant Commander Research and Engineering. Leaving Federal Service after 35 years, he then joined the staff of The Patuxent Partnership, a not-for-profit consortium of Industry, Government, and Academia as the President and CEO of the Center for Strategic Analysis (CSA).

In 2007, Dr. McErlean joined the staff of L-3 communications, Integrated Systems Group, as the Senior Director for Federal Programs. This business segment consists of aircraft modification, structural inspection and depot level maintenance of the Navy’s P-3, EP-3, and E-6b aircraft. In 2009, he was appointed an L-3 Engineering Fellow and took over managing and directing the Waco Independent Research and Development Program and serves as the senior Air Sciences engineer on the staff of the VP of Engineering.

Dr. McErlean is married to the former Sally Shindell. They enjoy sailing, skiing, gardening, and their grandchildren, Isabel and Michael. Dr. McErlean is a three time recipient of the Presidential Rank Award, the Air Force and Navy Superior Service Medal and the Navy’s Distinguished Service Medal. He was honored by his fellow engineers with the rank of NAVAIR Emeritus Fellow.