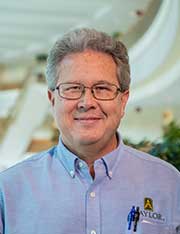 Dr. Olafsen's research is in the fields of nonlinear dynamics and non-equilibrium systems. The research efforts tend to be both interdisciplinary and multi-disciplinary with collaborators from other departments as well as other institutions. Dr. Olafsen enjoys collaborating with faculty in engineering, biology, and other sciences, publishing in both physics and other scientific journals. Dr. Olafsen is devoted to mentoring undergraduates in research and he has published several journal articles with undergraduate authors in premiere journals such as Physical Review Letters. Dr. Olafsen is the Editor of the Physics Department Newsletter.

Dr. Olafsen enjoys teaching at both the graduate and undergraduate level. He has previously taught classes in introductory physics, mathematical methods, statistical and thermal physics and nonlinear dynamics. Dr. Olafsen has written about teaching innovations and works to dispel the artificial barriers between the classroom and the research laboratory.