Operating under the auspices of the Association for Computing Machinery (ACM) and sponsored by IBM, the International Collegiate Programming Contest (ICPC) is the oldest, largest, and most prestigious computer programming contest in the world. Hosting the ICPC Headquarters since 1988, Baylor continues to make a difference by bringing the world's best and brightest students together to challenge their problem-solving skills.

The ICPC is a multi-tier event with local and regional contests, culminating in an annual World Finals. Baylor faculty and student volunteers play essential roles to make it happen. Two such volunteers at the 2013 World Finals in St. Petersburg, Russia, were Zach and Taylor First - both Baylor graduates. 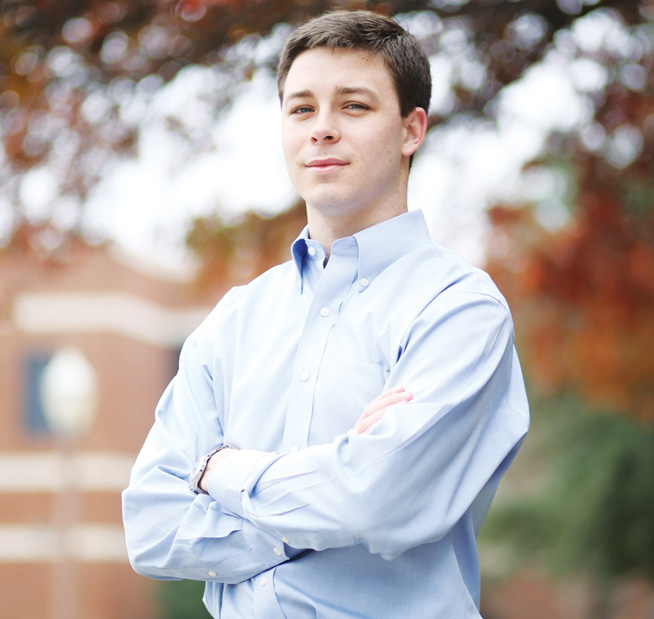 Zach First (BSCS '11, MS '13) served for two years in the Department of Computer Science's Global Development Laboratory under the direction of Dr. Jeff Donahoo. Zach's team developed the ICPC Management System while his wife, Taylor, a public relations graduate, served on the ICPCNews and ceremonies teams.

Of the ICPC Management System project, Zach said, "The overarching goal of the ICPC development team and the contest management system [is to] make it easier for the volunteers all over the world to conduct local and regional competitions."

When asked about the most rewarding part of working with the ICPC, Zach said, "I enjoyed communicating with people to understand their problems and helping to craft a solution to help eliminate that problem. For example, a problem statement might be: 'What do you spend the most time doing?' Then, the ICPC development team would try to create a solution that reduced the amount of time that that task would take."

Zach says his Baylor degree prepared him well for working on enterprise-level team projects that support a global operation. "The most applicable technical experience from my BSCS degree studies at Baylor was my Java coding skills. The firm understanding of data structures, SQL, bash, Perl and Linux that I got was also extremely valuable. In addition, I learned valuable non-technical skills such as time management and teamwork."

I enjoyed communicating with people to understand their problems and helping to craft a solution to help eliminate that problem.

Zach, now a solution architect at Hewlett-Packard, feels his experience at Baylor provided the technical background necessary to feel confident in his job search. "My ICPC experience helped on two levels. First, I found that many of my interviewers gave me the opportunity to discuss good practices and knowledge of leading edge technology within the context of an existing software solution in production.

"Second, my experience provided me with a basis to discuss a real world team that I had already worked on. I felt like answering interview questions with an ICPC example further emphasized that the ICPC had given me real world experience."

Though ICPC attracts some of the brightest computer scientists in the world, its strength lies in the diversity of volunteers and the way problems are solved together through unique points of view. Taylor volunteered at both the 2012 and 2013 World Finals. Taylor became involved with the ICPC by collaborating with Zach on how to most effectively communicate with ICPC followers on Twitter, as he was developing a social media application for ICPCNews.

When asked about her experiences with the ICPC, Taylor states, "I volunteered with the ICPC for a year and a half as a social media specialist. In St. Petersburg, I also assisted with ceremony coordination in addition to volunteering with the ICPCNews Team."

"Through my education at Baylor, says Taylor, "I was able to discover my passion and ability for public relations. I learned from trusted mentors, made lasting friendships, and met my husband. I was also able to mature in my personal relationship with Jesus. All of these things have helped shape who I am after graduation and where my life is headed. Baylor has made not a few differences in my life; but rather, it has made all the difference."

Taylor is now a technology and facilities liaison at Second Baptist School in Houston, Texas. "I feel that Baylor and the ICPC helped me prepare for my life today because of the relationships I have made and the experience I have gained. I can't say enough how the people I've met at Baylor and through the ICPC have influenced me to do what I am passionate about. Beyond that, I truly felt confident in applying for jobs that were listed as 'experience required' because of the projects I completed while working toward my degree and with the ICPC," she says.

Without the contributions of Baylor and dedicated volunteers such as Zach and Taylor First, the ICPC could not touch the lives of so many. Baylor's influence continues to span the globe and make a lasting impact on students as well as the future of computing and problem solving.

ACM, the Association for Computing Machinery, with more than 100,000 members, is the world's largest educational and scientific computing society, uniting computing educators, researchers, professionals, and students to inspire dialogue, share resources and address the field's challenges. For more information, see https://www.acm.org. The ICPC operates under the aspices of ACM.

IBM is the world's largest information technology and service provider. IBM has 35,000 software engineers in more than 90 research and development laboratories around the globe, who focus on solving real-world business issues for clients in more than 170 countries. IBM's sponsorship commitment to the ACM ICPC is part of a company-wide effort to advance the next generation of technology leaders and problem solvers who have combined skills of computing science and business management. For more information, visit https://www.ibm.com/university.

Baylor University has been the home of the ICPC since 1985, where it has been managed under the direction of Dr. William B. Poucher, ICPC executive director, and Dr. Jeff Donahoo, ICPC deputy director. Dr. Donahoo leads the global enterprise and social media research and development that makes possible the global reach of the ICPC. The ICPC contributes to Baylor's global mission to encourage the next generation to develop and apply their problem-solving talents to the challenges that face the world today and the world to come.