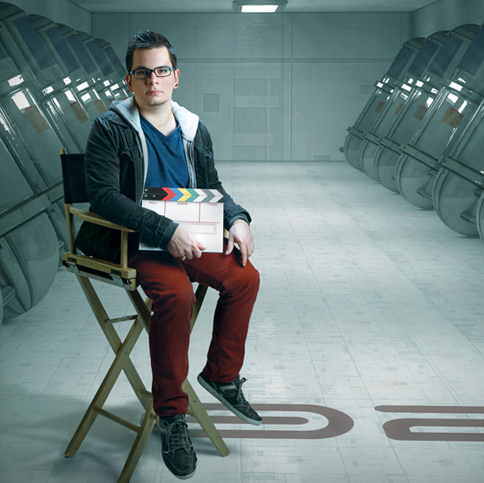 Christian Marcantel is a Computer Science senior with a concentration in Game Development. His areas of interest are in the creative application of computational graphics.

When Christian Marcantel sits down to design a video game, it's a bit like working on a movie. There's a plot to think about, characters to develop, a script to be story boarded, three-point lighting to focus on and countless other details to bring together. Add to that players who make decisions, and "that whole extra layer of interactivity really opens up limitless potential," said Marcantel, a senior computer science major who'll be graduating this spring with an emphasis in gaming.

Marcantel originally wanted to be a film director, then a writer, then an artist. He chose gaming for its mix of creative thinking and logic. "When you see how a computer's built, how things are run, what's happening on the computer screen, it's all these things happening in such a large magnitude," he said. "I think it's very beautiful. To use that and the critical thinking that's required to do that, I think it's almost limitless what you can do, which makes my creative side very curious."

The first Baylor graduates of the gaming program have already entered the workforce, and Marcantel will join them this spring after completing the capstone course, which is designed to simulate industry experience. Currently there are more than 30 students pursuing the gaming track.

"We are seeing a generation of kids who are born into a world that has had games exist forever," said Dr. G. Michael Poor, assistant professor of computer science. Poor joined Baylor's computer science program last year and teaches the junior- and senior-level courses for the gaming track including computer frameworks, or game engine development, and computer graphics. "It's one of the best ways students see of learning, of interacting, of being social with friends, of having competition. These are all the positive things that can come out of gaming."

The Entertainment Software Association's 2013 Essential Facts About the Computer and Video Game Industry report shows that 52 percent of parents believe video games are a positive part of their child's life, while 71 percent say that playing games provides mental stimulation or education.

Graduates of the program receive a solid foundation in computer science so their future can lead to a variety of career paths. "A lot of people in the industry are saying that's what they want. They want students with a traditional computer science background and a focus specialization in gaming," said Poor.

As part of their studies, students like Marcantel also spend time in Baylor's Film and Digital Media Division in the Department of Communications learning about scripting, theory and how to make images look good on the screen.

The Creativity and the Challenge 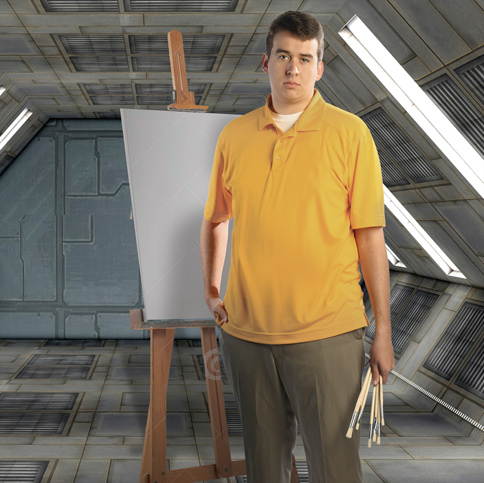 Ed Collier is a Computer Science senior and helps in the HCI research lab as an undergraduate researcher. He is interested in new ways of representing the 3-dimensional world.

Developing a game is a bit like making a painting for senior Ed Collier. "I enjoy being able to create something that I can see, and I can show to others," he said. Like a painter, Collier is still working to define his personal gaming style.

"When I make my 'paintings,' I might not know exactly what I'm going for, but eventually you might find something that you like," he said. "One of the fun aspects of it is exploring to find your identity."

Collier has always enjoyed playing video games in his free time and decided that he wanted to pursue gaming for that reason. The most intricate game he's developed was through Poor's frameworks class, where he and his classmates worked together as a team. "We started from scratch and spent the entire first half of the semester making a game engine. We spent the last half making a game," he said.

Collier's team designed their game, Tether, with two levels. "It's a progression, trying to get through the level you're in, solving the puzzles and obstacles that are in your way, finding a way to get from one point to another," Collier said, describing their creation.

There are always several ways to do something. Everyone finds his or her own way to solve a problem.

He pointed out that the team invested quite a bit of time up front scripting a plan so they had a road map to lead them. Things may take a turn during development, he said, but "if you plan well enough, you should be able to get around any changes."

Collaboration and keeping an open mind are keys to success, added Collier. "You want to work your best to make sure that a little bit of everyone's creativity is in there, and it's something that in the end everyone can be proud of."

Poor said the class gives students an opportunity to focus on the mechanics happening behind the scenes of the game. "The [game] world development, the character development, very simple artificial intelligence," said Poor, "it's putting the laws of physics within a virtual world. If you drop an item within a game, it's going to fall to the floor. You are going to try to match that to as realistic of physics as you can."

Collier said he enjoys that challenge. "Any type of program you do, a lot of times when you're solving that problem, it's kind of like a puzzle, and you're piecing it together," he said. "There are always several ways to do something. Everyone finds his or her own way to solve a problem."

The Capstone and the Future

For students eager to work in the industry, gaining real-world experience for their portfolio only strengthens their future opportunities. The vice president of Gearbox Software — game development company that is one of the top three in the world, according to Poor — teaches the gaming capstone course.

"They have been very generous in giving of their time," said Poor, noting that the VP travels from the Dallas area as much as possible to work with students or holds class via Skype.

"They're donating their time to teach our students, to give them a lot of insight with what the industry is looking for, what they do on a day-to-day basis, to really ground the students in more of a realistic approach to what gaming is," said Poor. Several students have interned with the studio as well.

"He will oversee development as they go over an entire four-and-a-half-month development process in creating a new game from scratch, which the students can put into their resume and their portfolio," said Poor.

Poor hopes that one day Baylor will have a game development center that provides opportunities for students to work in teams outside of the classroom setting. "It would be a place where companies could come and hire them to do game reviews or [where they could develop] downloadable content," said Poor. Content that players can download is often used to add new challenge levels to a video game or provide different aesthetics within the game. Poor said having a gaming center would also provide students additional material to show prospective employers.

There are plenty of statistics to back up the impact the gaming industry is making.

Sales are strong. The Entertainment Software Association's 2013 Essential Facts report points out that 58 percent of Americans play video games. That same report shows that in 2012 consumer spending in the gaming industry totaled more than $20 billion in accessories, content and hardware.

Jobs are strong. The Texas Film Commission with the Office of Texas Governor Rick Perry points out that Texas has the second highest concentration of game companies across the United States, with more than 150 development and publishing businesses in the state that employ around 4,000 people.

The Commission website says that "between 10 and 15 percent of Texas game developers create serious games, programs that use game technologies for educational, military, medical and even government purposes. Working with major universities and federal institutions, Texas game companies are shaping the next generation of computer and video game tools."

Salaries are strong. Game Developer magazine's 2012 Game Developer Salary Survey shows that employees who have three or fewer years of experience in the field can make around $50,000. That average salary for an entry-level designer is up more than $4,000 over previous years.

Both Marcantel and Collier see their future careers in the gaming industry as an opportunity to impact people.

"I believe the best way to help someone learn is to help them be interactive with the problem," said Marcantel, who hopes to develop games that inspire people to new ideas or to realize a different perspective.

Marcantel chose Baylor largely for the interest the faculty took in him and for Baylor's Christian mission. "When a university like Baylor is backed by such a core theological philosophy of things, you get a personality with that. It seems like there's always a constant there among the faculty of compassion and understanding,"said Marcantel.

As for Collier, he plans to pursue his master's in 3-D graphics and one day work as an independent developer. He enjoys making people happy through gaming. "I want to help solve technical problems to help innovate games," he said.

He said the creative side of gaming is appealing. "For a lot of us that are in the gaming track, we want to express ourselves in a visual way, in the way that a director would want to [express] themselves in a movie or a writer in a book. We choose games to be our medium of creativity," said Collier.

"The more fun that people can have with developing, the more into the actual process of developing they become, which is what we really hope to use within the gaming field," said Poor.

Learn more about Gearbox software from the Synergy article, "Game On".