Dr. Erich Baker envisions a day when patient care will be customized so that appropriate treatment of illness or disease is developed and prescribed based on an individual’s unique genetic background. 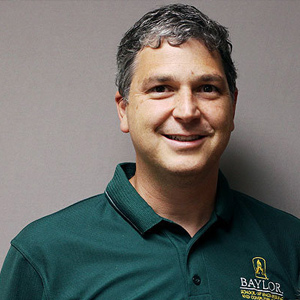 “Today, we’re probably one decade away from having treatments optimized for the individual, so that we draw your blood and we know which medicine to give you based on your genome and the way your body works,” explained Dr. Baker, director of the bioinformatics program at Baylor’s School of Engineering and Computer Science. “A lot of universities and medical centers are already starting down this path. This is ‘optimized medicine’. But, to look at your blood and create a new treatment that works specifically with your genome—that’s the Holy Grail. That’s a couple decades away.”

The field of bioinformatics exists and is rapidly evolving at the intersection of biology and computer science, where algorithms, mathematics and “machine learning” (read: artificial intelligence) are used ever more effectively to solve biologically-relevant problems.

“It started out in genome sequencing and alignment,” explained Dr. Baker. “Simple questions were asked: What are the genes of the genome? How are they similar within the species? How do they interact to produce a phenotype?”

The first DNA-based genome sequenced was the bacteriophage phi X 174, completed in 1977. By the mid-1980s, planning was underway to launch The Human Genome Project (HGP), an international research project completed in 2003 that aimed to identify the sequence of chemical base pairs which make up human DNA, and to “map” all of the genes that comprise the human genome, both physically and functionally.

But mapping the more than three billion nucleotides found in a human haploid reference genome—or your standard-issue, representative genome—presented some very practical challenges. Every genome is unique, so mapping the human genome had to take into account multiple variations of each gene; and the staggering volume of data produced was a problem only computer science could tackle.

“Bioinformatics has grown a lot in the last decade, encompassing broad areas of biology, like systems biology and ‘precision medicine’ — a new term — applying computation to identify the best treatment modalities for particular diseases,” explained Dr. Baker. “You can do a genetic screening and look for biomarkers that indicate which drug treatments work best for your type of cancer. That’s been pretty successful. A lot of bioinformatics is moving toward this kind of precision patient care.” Most of Dr. Baker’s funded research centers on complex diseases like alcoholism, drug addiction and post-traumatic stress disorder—all conditions that cannot be linked to any single, causative gene.

“Like with alcoholism, there is a genetic component, an environmental component, components of learned behavior. There are a lot of things going on,” explained Dr. Baker. “Underneath the hood, genes work in networks and these networks—from a computer science perspective—look very much like graphs, and how do we apply graph theory to understand the complexity of the gene networks behind these diseases that are relatively complex?”

In a study published in July 2015 in BMC Bioinformatics, Dr. Baker introduced “PredSTP,” a model he developed which accurately predicts proteins that are antimicrobial.

“We are able to use computer science and machine learning to isolate protein structures that insects produce, which aren’t harmful to humans but can kill bacteria.”

Working together with colleagues from the Jackson Laboratory and the University of Tennessee, Dr. Baker has also helped to develop a software system, “GeneWeaver.” This extraordinary tool helps researchers “store, share, analyze and compare results of their own genome-wide functional genomics experiments in an environment containing rich companion data obtained from major curated repositories, including the Mouse Genome Database, the HGP and other model organism databases, along with derived data from highly specialized resources, publications and user submissions,” according to the findings published June 2015 in Mammalian Genome.

“We try to work between the underlying algorithms that are mathematically intensive, and the biologists who don’t know anything about math,” explained Dr. Baker. “We want to fill the gap between mathematics and the biology lab person. They’re just saying, ‘Here’s my data set. Can you give me some answers that make sense?’” 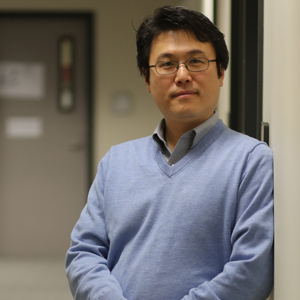 While Dr. Baker describes himself as “a biologist gone bad,” his Baylor colleague, Dr. Young-Rae Cho is perhaps the opposite. Bringing a background in computer science and engineering, Dr. Cho develops computer algorithms and then looks for biological problems to solve.

“In a phrase, my current research could be called ‘computational network biology’,” explained Dr. Cho, who is also interested in complex diseases and the physical or functional interactions between molecules—represented as an “interaction network.” These networks may unveil otherwise hidden higher-level organization of cellular signaling or communication.

“Most complex genetic diseases are caused by defects of cell signaling,” explained Dr. Cho in a recent issue of Computational Biology and Bioinformatics. This particular paper presented three new algorithms aimed at illuminating a signaling cascade—vital to understanding the mechanisms underlying complex diseases.

Dr. Baker is hopeful he will see the aforementioned Holy Grail—the creation of custom treatments according to a patient’s unique genome—in the coming decades with bioinformatics pulling its weight in concert with other fields.

“We really need more than bioinformatics. That takes bioengineering, nanotechnology, material science. But, that’s what everybody is working towards,” said Dr. Baker. “Take lupus, or understanding what is causing your lupus. There are probably 50 or 60 different reasons you can develop lupus. We can see the phenotype as one phenotype but genetic underpinnings—that’s a very complex landscape. So if we can understand exactly why you have lupus, we would know with certainty which treatments to have you on.”