When Dr. Douglas Smith, associate professor and graduate program director for mechanical engineering, came to Baylor in 2013, he brought an idea.

The idea was a program he had seen at the University at Missouri — a program that seemed like the perfect fit for Baylor University with its mission to integrate academic excellence with Christian service. And after Baylor students attending Smith’s interest meeting in 2014 responded with an excitement to match his own, the Baylor BUV organization was born.

“I was very impressed with the amount of support from the students. Some of them had worked on cars, one student was pretty good at welding but most of them had never held a wrench in their hands,” Smith said. “They liked the idea of building cars…but when that’s coupled with the humanitarian effort, and that’s part of what drew them to Baylor, now they had a program where they could use their engineering talents to help other people.” 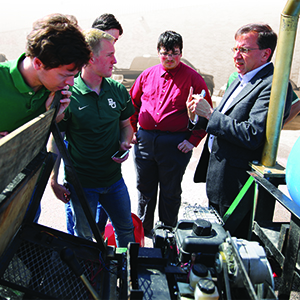 Baylor BUV has competed in IAT’s BUV Design Competition for the last two years, placing third in 2015 — Baylor’s first year to compete — and improving to a tie for second place in 2016. However, the Baylor team enjoyed a different type of victory, and perhaps a sweeter one, when they used their BUV to pull a competitor’s trailer — carrying the BUV that had been awarded first place — out of the mud where it was stuck.

“That was just a ‘Yes! Victory!’ kind of moment,” said Joshua Engle, a senior mechanical engineering major who attended the competition. Engle joined Baylor BUV as a sophomore during the organization’s first year and now serves as the Baylor BUV president.

While the IAT competition is a fun and exciting trip, it is the culmination of many months of intense physical and mental labor for the members of Baylor BUV. Undergraduate students, with Smith acting as advisor, build each BUV from scratch, generally recycling parts from local junkyards and salvaged vehicles. The design phase of the project often takes the entire fall semester and continues on into the spring when building commences.

Baylor BUV gives students an opportunity to put the knowledge and skills they learned in the classroom to a practical purpose. Seniors involved with the organization, like Engle, have even chosen to focus their senior design projects on improving the BUV. Engle and his classmates dedicated their project to designing a frame that would be compatible with multiple salvaged rear axles, allowing BUV Baylor students of the future to more easily adapt the BUV designs from year to year.

Though the experience of building and competing a BUV is highly beneficial both inside and outside of the classroom, the accumulation of technical skills is not the only reason students continue to be attracted to the organization.

“Baylor BUV piqued my interest to start thinking outside the box about how I can take engineering outside of its normal context. I’m thinking about how we can take the things we’ve learned in engineering and use that to help people in situations who aren’t as fortunate,” Engle said.

Baylor BUV has recently formed two different partnerships with the goal of getting their BUVs to those who need them. Tools for Hope is one of these partnerships. A nonprofit organization working to aid subsistence farmers in East and Central Africa, Tools for Hope has connected with Baylor BUV to bring a BUV to Rwanda, where the vehicle will be used to transport crops from farms to market.

“At the competition last year, Tools for Hope asked us if we would be interested in donating our BUV. I said that I didn’t see any problem with that, but I would have to let the students decide,” Smith said. “I went back and told the students and all of them said, ‘Let’s give it away!’ They were all thrilled about it because that’s why they joined the organization.”

Baylor BUV is hoping for and seeking additional funding to make the dream of transporting the BUV to Rwanda a reality.

The other partnership was formed this spring with Jimmy Dorrell of Mission Waco. Baylor BUV is building a vehicle to serve Urban R.E.A.P (Renewable Energy and Agriculture Project), which will include an aquaponics greenhouse and other sustainable components. According to Smith, the hope is that the BUV might also make its way down to Mission Waco’s site in Haiti to replace an old pickup truck as the primary source of transportation.

“The whole goal of this is to make a reliable, cost-efficient, rugged vehicle to help people who don’t have the means to haul things. That whole mission aspect makes Baylor BUV important,” Smith said. “It brings together so many things that are Baylor.”

When the very first BUV was built back in 2014, Smith remembers trying to film his very excited students driving a vehicle with no brakes through a parking lot with a storm approaching. While his mind was on safety and what they would do if the BUV broke down in the rain, the students were thrilled to have created a functioning machine.

At Baylor, students are encouraged to not only strive for academic excellence but also to pursue Christian compassion and service. Baylor BUV puts this mission into action. Even as they yell, “We built a car!” the students are also building compassion and working to change lives in their community and beyond.