Baylor student organization, Engineers with a Mission, is focused on improving lives in underserved communities while prioritizing collaboration, sustainability and social responsibility.

Chartered in 2004, Baylor student organization, Engineers with a Mission (EM), offers engineering students opportunities to serve those, both in Waco and around the world, who struggle in various ways. Over these past 13 years, faculty sponsor Brian Thomas says he has learned a great deal about using resources efficiently, how to draw student participation and, most significantly, how to help communities in need without inflicting harm.

“Our mission statement has evolved over time as we’ve learned more about not coming in as these ‘technology saviors’ and just delivering some improvement that is unwanted or misunderstood,” said Professor Thomas, senior lecturer at the School of Engineering & Computer Science and lead faculty member of the new humanitarian engineering concentration at Baylor. “We’re much more collaborative with those on the ground. These have to be the solutions that [communities] want—not what we think they need.”

Since EM was founded in 2004, Baylor engineering students have established relationships with Waco’s Rapoport Academy, tutoring elementary and middle schoolers in science and math, and Mission Waco’s “Engineering for Kids” after-school program, which is aimed at cultivating early interest in STEM fields.

“My favorite thing about tutoring at Rapoport Academy is connecting with the students,” said Megan Cheng, senior electrical and computer engineering major and EM project manager. “I remember one girl last year I grew close to because I had noticed some of her drawings, and it made the time we worked together much more meaningful.”

As busy as they are, Cheng and other EM tutors know that the mere 60 or 90 minutes they commit to helping young students each week can yield a mutually transformative experience.

“There’s a lot to learn from others who come from different ethnic, cultural and socioeconomic backgrounds,” Cheng said. “It’s fun to be a part of something larger than myself. The local community will be here long after I graduate, and volunteering locally is a great way to leave my mark.” 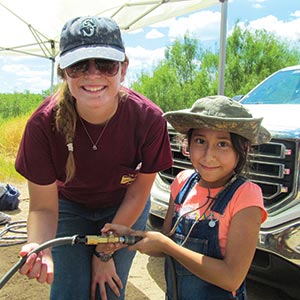 Over Spring Break, EM traveled to Laredo, Texas, for the second time to an area of the city deemed a “food desert”—meaning there are no grocery stores, farmers’ markets or even gas stations for many miles.

“Las Lomas is a part of town unreached by city water lines,” explained Dr. Jill Klentzman, lecturer of mechanical engineering and faculty volunteer with EM. “Residents have to drive and wait in line for hours to fill large 300- or 400-gallon tanks with clean water and take them back to their home.”

Having learned of Las Lomas through a relationship between Baylor Missions and the Cooperative Baptist Fellowship, EM made its first trip to the border town in July 2016, bringing with them an energy-efficient drill specially designed for use in developing regions. The equipment, purchased with private donations as well as a $7500 grant from Baylor Missions, was able to penetrate a stubborn, rocky layer of earth and finally hit water. Baylor students then devised a way to filter clean water from the soil, rocks and clay.

“Las Lomas was not ‘unreached’ before we got there,” said Jack Ramsay, junior mechanical engineering major and president of EM. “God had been working there long before we arrived. We were brought to Laredo to be a small part of God’s work there.”

Over Spring Break 2017, EM partnered with a group from the Diana R. Garland School of Social work, taking 33 people including faculty sponsors back to Laredo with a two-fold mission: to install a well and working water pump at Vaquero Church, a church that stands about a half-mile from the first well project, and also to gauge interest and garner community buy-in for this second project.

“The social work team was interested in learning about how churches in the area support immigrants, but they also helped us by holding town-hall-type meetings in order to identify the priorities of the community,” Thomas said.

The hole drilled during EM’s 2016 trip was developed and a solar pump was installed, delivering water from 43 feet below ground to a storage tank 300 feet away. Though the water is non-potable, “the hope is that the community can use it for toilets, laundry and other types of washing. It won’t solve all of their water problems, but it will be a help,” Thomas added.

In addition to improved water access, the community expressed a desire for a soccer field where children could play together. Some on the EM team designed and built soccer goals, converting the land behind the church into a soccer field.

“The people at the church [Vaquero Church] really took us in and welcomed us,” Klentzman said. “They made us lunch every day we were working, they brought their kids and we got to know them; when we were drilling, people would just come out and watch like a spectator thing and some of the neighborhood boys wanted to try drilling themselves.” 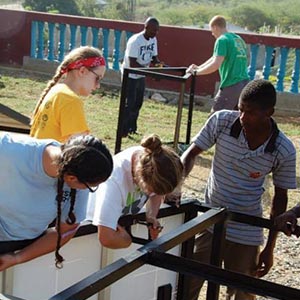 This May, just after finals, Professor Brian Thomas and a small team of EM students will board a plane to northern Haiti, the poorest country in the western hemisphere, where approximately 80 percent of the population lives in poverty. At the IDADEE orphanage (a French acronym meaning ‘The Initiative to Assist and Mentor Children’) in the city of Cap-Haitien, EM will help install an array of solar panels to supplement the compound’s existing generator.

“They have a large gasoline-powered generator that powers the whole compound, but it’s huge and it’s expensive to run,” Thomas explained. “They have to fire up this enormous thing even when they only need a couple of lights on. The solar panels will tie into the same lines that the generator feeds. And when they don’t need full power, they’ll turn the generator off and turn the solar on.”

May’s mission trip will be EM’s fourth to Haiti. Previous projects have included the installation of solar arrays at various buildings and schools and installing smaller solar panels on top of private residences, helping Haitians start micro-businesses out of their homes.

“Customers can stop in and charge their cell phone batteries,” Thomas explained. “The quality of work [Baylor students] did on these projects was excellent.”

In planning service projects of this length and scale, Thomas has learned that if he wants to lock in the maximum number of commitments by Baylor’s ambitious engineering students, timing is everything.

“We’re boarding the plane to Haiti on Sunday, May 14—the morning after graduation for seniors,” he said. “And we return the day before summer classes start. Also, a lot of engineering students are concerned about securing professional internships over the summer, so we can’t schedule these trips in the middle of June or July.”

One challenge in completing the solar installation in only two weeks is the limited amount of time the EM team has to get to know the administrators and children working and living at the orphanage.

“Spending time with them, talking to them as peers and not projects and coming in with the attitude of a learner—these things take time,” he said. “That’s what’s extra-hard about a short-term trip. There simply isn’t enough time. But when we follow the lead of some full-time on-the-ground missionary or organization, and filter all we do through them, much of the danger of hurting instead of helping is minimized.”

For more information about Engineers with a Mission, visit baylor.edu/ecs.