Genesis 1:28 says: God blessed them and said to them, “Be fruitful and increase in number; fill the earth and subdue it. …” That verse holds deep meaning for Dr. Annette von Jouanne, Professor of Electrical and Computer Engineering. 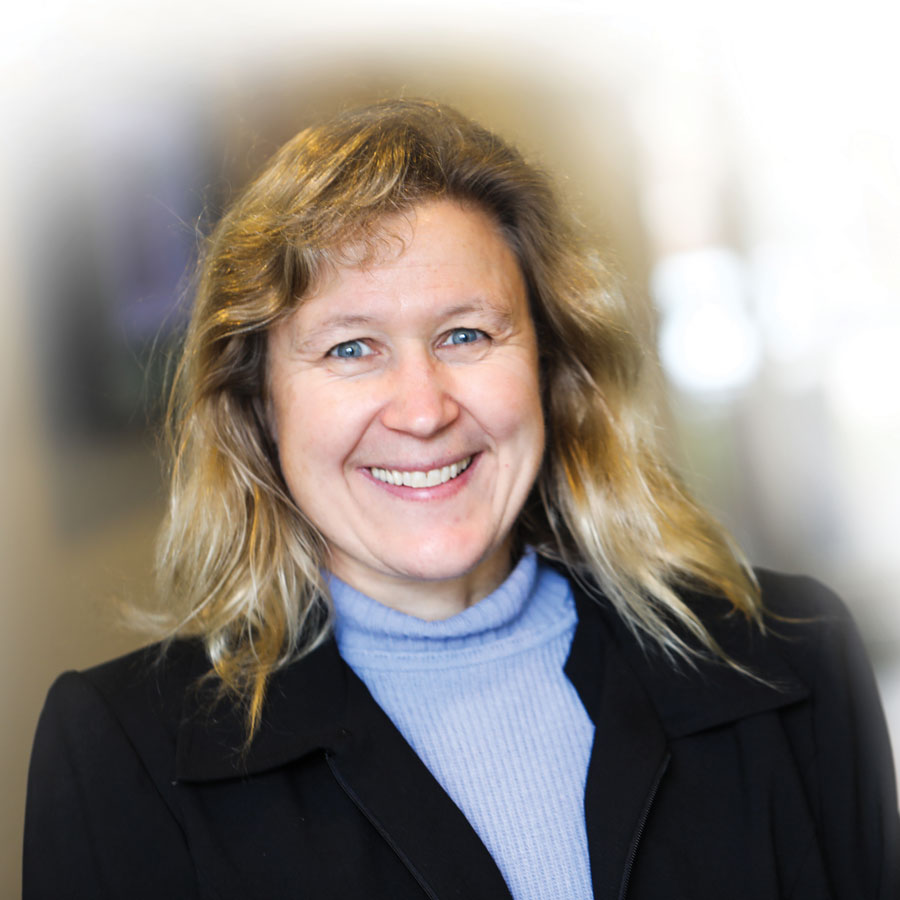 For engineers like her, Dr. von Jouanne sees that verse as a divine invitation.

“Subdue in the Hebrew is that God has purposefully designed into the earth unrealized potential for us to discover and activate and utilize for man’s good and God’s glory,” she said.

After a 22-year career at Oregon State University, Dr. von Jouanne and her husband, now a professor of mechanical engineering at Baylor, felt a draw to equip students on a Christian campus and joined Baylor last year. “Baylor’s mission to be a preeminent Christian research university is really in alignment with our vision as well, and we wanted to be a part of that,” she said.

The goals of improving transportation, diminishing pollution and curtailing energy consumption are often the hallmarks of Dr. von Jouanne’s research. In 1999, her experience working on the Ford Escape, the first hybrid electric sport utility vehicle, sparked her passion for sustainable transportation. That work focused on optimizing and testing the car’s electrical generator.

That was followed by an opportunity to contribute to the first hybrid electric tank. She researched advanced power electronic converters and how to minimize electrical signatures for stealth operations.

At the heart of Dr. von Jouanne’s research is a focus on ways to ensure a sustainable energy future. “Electric and hybrid vehicles offer increased efficiency — energy savings — through better fuel economy and reduced emissions/pollution, especially when the electricity is being generated from renewable resources such as wind and solar. EVs help the U.S. to have a greater diversity of fuel choices for transportation,” she says. “Almost all of the U.S. electricity is produced from domestic sources, including natural gas, coal, nuclear and renewable sources, whereas currently about two-thirds of our country’s petroleum demand is needed for transportation.”

Fast forward to Baylor where she now teaches the Electric and Hybrid Vehicles course and is developing research and testing capabilities for electric vehicles (EV) and hybrid vehicles, including a chassis dynamometer testbed, motor/generator testbeds, fast-charging capabilities with local energy storage, and hardware-in-the-loop testbeds to emulate vehicle-to-grid (V2G) and vehicle-to-home (V2H) systems with the aim of using electric vehicle energy storage as a distributed energy resource for the grid.

“When the Lord tells us in Genesis 2:15 that we are to steward, to care for, His creation, He demonstrated that He created us for a tremendous purpose — to bring Him glory and to learn about Him and His creation. That is what is very exciting for me — helping students reach their potential in asking questions about the amazing resources God has provided and seeking to answer those questions,” she said.

“We’re able to graduate students with a keen understanding of the importance of helping us ensure a positive energy future through renewables and sustainability,” Dr. von Jouanne said.

Her lab at Baylor will help her continue her focus on electric vehicles and is under construction in the Baylor Research and Innovation Collaborative (BRIC). Through a bay door, she’ll be able to drive a car onto a platform that contains a chassis dynamometer, which is somewhat like a rolling road, with each wheel sitting on rollers. The dynamometer measures the speed, torque and power of electric vehicle motors and generators. The controlled environment simulates how a car handles on the road and tests its performance.

Her electric vehicle research is two-fold. It will include the transfer of energy between an electric vehicle and a power grid. “Not only is the power coming in the direction of grid to vehicle, but power can flow back from vehicle to grid,” said Dr. von Jouanne. Because an electric car has stored energy, the power grid could pull from the car’s battery during times of peak demand and charge electric vehicles when there’s excess power, creating a bi-directional energy flow.

In the future, a customer’s contract with the utility company might grant permission for their battery to be used as a distributed energy resource to firm up the grid in times of need, she said.

Innovating the future, however, does not come without the need to overcome some hurdles.

“One of the challenges with electric vehicle acceptance is that it typically takes much longer to charge your electric vehicle than it does to fill up your conventional vehicle with gas — several hours versus about four to seven minutes. Thus, my research will look at fast-charging of electric vehicles — for example, 10 to 15 minutes, using local energy storage,” says Dr. von Jouanne. “Current work in fast-charging is showing that the EV battery is depleted faster — in other words, that fast-charging reduces the lifetime of the battery. Thus, I will be characterizing the health and performance of the battery and researching methods of charging faster without damaging the battery.”

Proterra, a leading electric bus producer, is in the process of donating one of their busses to Baylor for various professors to use in their respective research. Dr. von Jouanne will use the batteries and fuel cells. Because the battery management system is proprietary, when a bus is retired, the batteries must be removed. The batteries will serve as local energy storage in Dr. von Jouanne’s lab, simulating a vehicle that can be quickly charged from the grid.

When it comes to the Baylor campus of the future, Dr. von Jouanne can imagine two innovative energy solutions. The first is fast charging electric vehicle stations that reduce the time it takes for a car to charge.

The second solution is a day within the next 10 years where an autonomous slow driving shuttle transports researchers from the main Baylor campus to their labs at the BRIC. When the vehicle pulls over a charging pad at the BRIC, it could automatically charge without needing to be plugged in, von Jouanne said.

“The mind is such an incredible creation that God has given us. Only the mind can create new knowledge,” said Dr. von Jouanne. “All this artificial intelligence, and yet it’s the mind that’s the most powerful in order to really ask new questions and seek new answers. For me, I have always been interested in all things energy related.”