For Baylor computer science students, a summer conducting research in the Czech Republic did more than broaden horizons. It shifted perspectives and altered trajectories - propelling them toward possibilities they hadn't previously imagined.

It’s the adventures and misadventures of international travel that make it unforgettable. And the nine Baylor students who spent last summer in the Czech Republic had plenty of both. Upgrading fist-sized “kolaches” in the States for a koláč the size of a large pizza pie. Missing the last public bus of the evening and having to hoof the 11 miles back to their residence on foot. Getting a glimpse into real Czech family life when a fellow student invited them home.

Many of their tales would be familiar to anyone who’s spent a little time traveling: the inevitable faux pas, discomfort of the unfamiliar and excitement of discovery. But this was also a trip of firsts.

Buoyed by a grant from the National Science Foundation (NSF), Dr. Tomas Cerny, assistant professor in computer science, set up a study abroad experience unlike any past opportunity in Baylor’s School of Engineering and Computer Science: two months of engaging undergraduate computer science students in research on software testing and quality assurance in the Czech Republic’s two largest cities.

A Quest for Excellence, In Practice and Product

For the first four weeks of the trip, Czech Technical University (CTU) in Prague, Cerny’s own alma mater and one of the oldest institutes of technology in Central Europe, served as the students’ laboratory. Lectures by CTU professors on how to optimize testing of software to ensure reliable, quality products were followed by assignments calling on students to immediately put these new pieces of knowledge into practice. The focus on integrity of product through excellence in testing continued in the city of Brno, where the group spent their second month learning from and working alongside top minds in the industry at Red Hat, a renowned multinational, open source software company.

“I wanted them to gain knowledge and exposure in both academic and commercial settings,” Cerny said. “And I wanted them to contribute to research in a meaningful way, working directly with products that are in daily use in the industry.”

For Cerny, a native of the Czech Republic who first came to Baylor as a graduate exchange student himself, the trip was about students gaining other intangibles too. Confidence, for instance.

“In the beginning you could see the worry. But after a while the students started realizing that, no matter where you are in the world, we all have similar problems and similar joys,” Cerny reflected. “And now I think they are more open to anything that comes their way. They are more innovative. Really, by the end of the trip, these students were completely different beings.

Before Andrew Walker, a senior from Plano, Texas, landed in Prague last summer, he had never stepped onto international soil. From his first computer science class in high school, Walker had been drawn to the field because of the endless potential to constantly be creating something new. 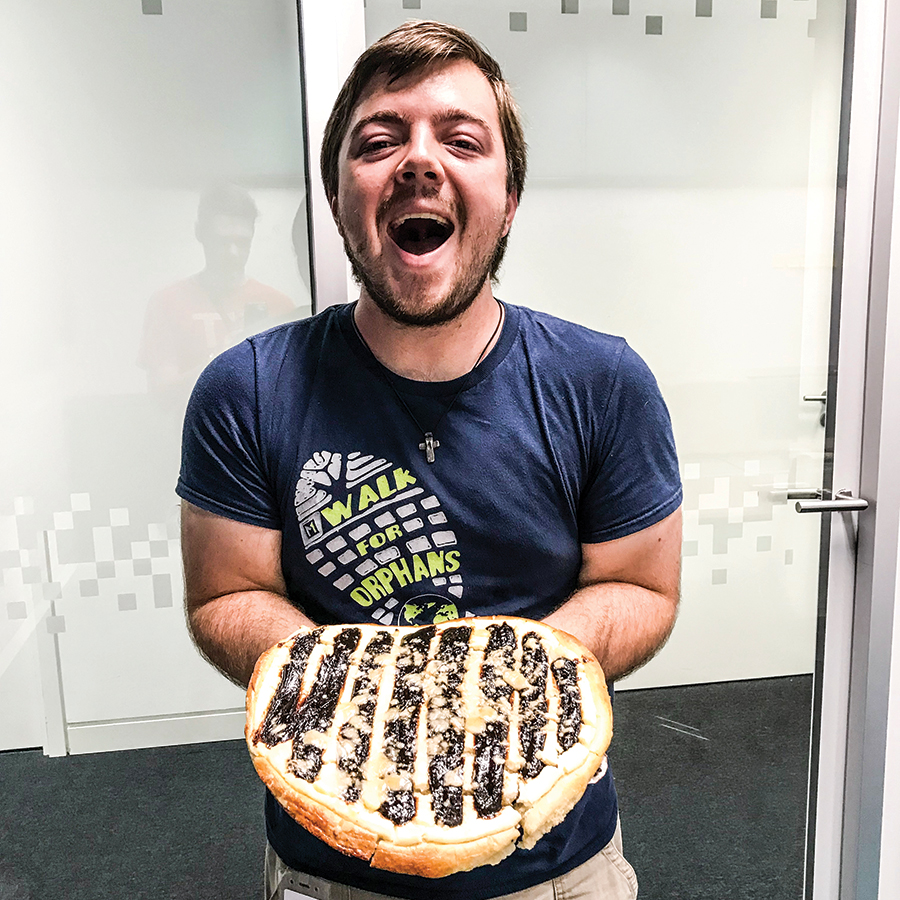 “I really liked being able to make anything that you want, from an app to a website,” he said. “If you can think of it, you can go develop it right now.”

At Red Hat, Walker had the opportunity to work alongside the Baylor team’s mentor and quality assurance engineer Pavel Tisnovsky, as well other Czech counterparts, in developing a new application called StackOversight. Before a new version of software is released to the public, this tool can be used to find code that is copied from online sources. And since copied code is often unverified and riddled with bugs or other problems, the development of this kind of prototype is an important contribution to the industry. It’s also the reason Walker — only months after his first time to travel abroad — is going back to the Czech Republic in January.

Representing the team of Baylor and Red Hat researchers behind the project, Walker was chosen to present on the application at a highly selective technology conference called DevConf.CZ in Brno. That’s a pretty big deal for any undergraduate, but especially one, like Walker, who now wants to pursue graduate studies in computer science internationally.

“It’s incredibly exciting to get to do this,” he said. “Red Hat is one of the industry leaders, and the opportunity to meet with and learn from thought leaders in the field I’m most interested in is truly invaluable.” 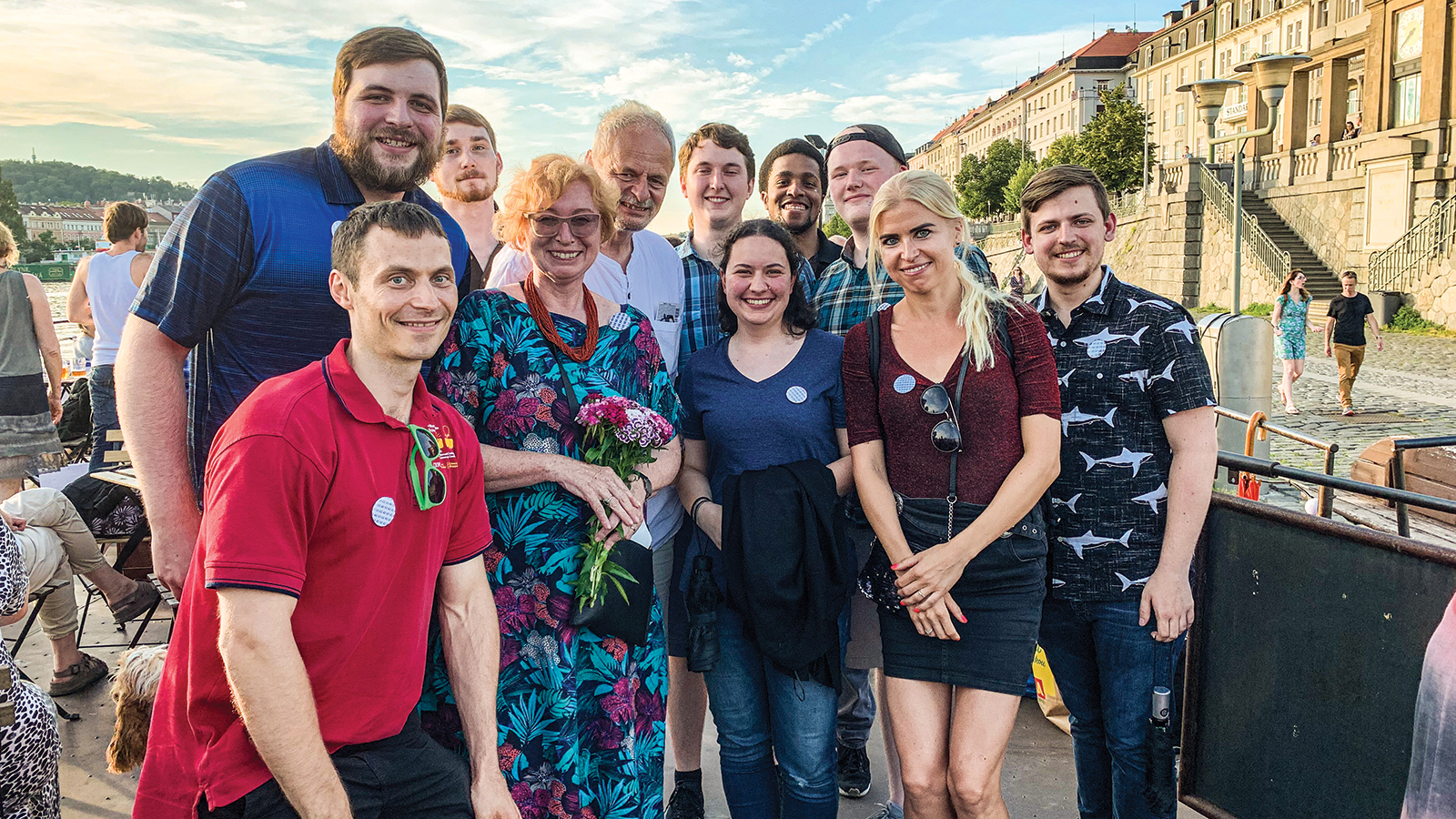 A Field for Problem-Solvers

Red Hat’s reputation was one of the main draws for senior Stephanie Alford to participate in the trip as well. “I had used their operating system in one of my classes, and I wanted to see more of what goes on over there,” Alford said.

She was not disappointed.

“I got to do things on that trip I’d never done before. For example, we never really code in Python at Baylor, but overseas that was the main language one of our big projects required, so it was a great opportunity to develop skills in that area.”

This hunger for new challenges is a trait that serves Alford particularly well in a field where female colleagues are rare. The only female student on the trip, Alford says that she’s grown accustomed to being one of very few women in a classroom. It’s a scenario that is not unique to Baylor, as currently only around 18% of computer science bachelor’s degrees across the United States are earned by women.

“I would like to see more girls in this field in the future, but the guys on this trip were great to work with,” Alford said. She recalled that there “weren’t many girls on the Czech student side of things either.” And while standing out has never slowed Alford down or quelled her curiosity, it did make the opportunity to hear from a female professor at CTU memorable and inspiring. Božena Mannová, a lecturer and researcher at the university, taught the group about what can make a software development project fail and how to manage a project so that it doesn’t.

Computer science, by its nature, is a field where problem-solvers thrive after all. “Our courses don’t teach us the answers to problems. They teach us methods to solve them,” Alford explained. “It’s not an easy thing to learn because we’re never simply told ‘this is the solution.’ That makes this major a little more complicated than others, but I think that’s why I enjoy it — because it’s a challenge.”

According to Alford, learning methodology has given her the tools to know how to approach problems beyond those that are computer-related. “It gives you another way of looking at things,” she said.

New Lenses for a New Worldview

Denton Wood’s perspective shift on the trip came from a different source than he might’ve guessed: Red Hat’s summer interns. Wood, now a Baylor graduate student in computer science, was finishing his senior year at Baylor and considering next career steps when Cerny approached him about the research opportunity in the Czech Republic.

“It was only my second time to leave the U.S., and it was really my first time to be completely immersed in another culture,” Wood recalled. “When we arrived in Brno, Red Hat was just bringing on a new group of local interns. One of the first days, I ended up staying at the office and talking with them for hours about the EU and the U.S. and governmental and cultural differences.”

Wood became close with several of the interns over the next month and ended up creating a Facebook group to keep their dialogue going. And though they’re once again separated by 5,000+ miles and an ocean, they still chat and keep up.

“There’s just so much to learn from the people there, and I guess anywhere really. I feel like my perspective changed, and now I see a bigger world that’s linked together rather than just our little corner,” Wood mused. “Getting to live among and make friends with the people — experiencing the day-to-day of a culture rather than what you see as a tourist — is something that I will never, ever forget. And I hope to be able to do again in the future.”

That’s Cerny’s hope too. With the National Science Foundation grant, he’ll be able to take six computer science students to the Czech Republic each summer for the next two years. And just as he did for the first trip — finding funding for three additional spots — he’s already looking for additional resources to open the opportunity to more students.

“The interest from students is much higher than what we can accommodate budget-wise,” Cerny admitted. “But I want to continue building capacity and take more and more students in the future, because it’s so rewarding to see the kind of transformation that happens in their lives as a result.”